Music has always been an incredibly important part of my life.  I’m one of those people that if I hear a song in the morning on the way to work that I don’t enjoy, it can easily ruin my day.  I find myself going through waves of themes and styles with my music throughout the year; naturally, around Samhain/Halloween, my tunes take a turn towards the spooky.

Here’s a list of music I like to listen to around this time of year that doesn’t just contain the typical “Monster Mash” you hear on every single playlist.

While this song is meant as a statement against the potential vein nature of some folks in the goth culture, it ironically completely captures the spirit of the season and culture perfectly.

When Peter Steele talks about the figure of his desire being even more enchanting than Lilly Munster or that her perfume smells like burning leaves, it makes me feel the exact feelings for Aurora.

Funny enough, this has become our daughter’s favorite song.  She requests it all the time!

Cradle of Filth is an extremely polarizing band.  Metalhead-elitists absolutely hate them.  Some non-metalheads find themselves loving them.

Either way, if you like your music to be a bit heavier, this is a perfect band for you this time of year.  While all of their songs explore a wide variety of gothic themes, this one is probably their most popular and easily digested by the masses.

This song has probably been on my list the longest out of everything else on here.  I remember jamming the crap out of this album with my dad when it came out.

Not only that, but it’s also the second song on this list to mention The Munsters, Dragula being Herman Munster’s drag racing car in the show.  This song comes from my absolute favorite era of Rob Zombie’s music in its themes and execution.  Plus, the visuals that go along with it are amazing!

If you have consumed any “witchy” media since the early-90s, then you know exactly why this song is on this list.  For some reason, it perfectly captures the vibe of being a witch during Samhain/Halloween.

I’m not sure if that’s just because of its heavy usage in movies like The Craft and shows like Charmed, but I absolutely love to give this song a spin this time of year.

5. Motionless in White – We Only Come Out at Night

Motionless in White’s album Creatures is an absolutely perfect 10/10 for me with any of the songs off of that album being a good fit for this list.

But the reason that We Only Come Out at Night is a stand-out to me is the introduction of the song using the famous Bela Lugosi line from Dracula to bring you into a tune about being a vampire.

6. My Chemical Romance – Vampires Will Never Hurt You

Pretty much any song off of the first two My Chemical Romance songs could fit on this list but the atmosphere of this music video makes it my choice.  Plus, you can’t go wrong with having yet another song about being a vampire on a Samhain/Halloween list.

While some may disagree that I didn’t put the original Misfits version of this song on the list, I tend to favor AFI’s version better.  I think I like that it has a bit more production on it.  But, I digress.

This song is a super logical choice as it celebrates the holiday very outwardly.  Plus, the artwork for the cover of the EP this came from is incredible.

Ghost is one of those bands that naturally lend themselves to Samhain/Halloween with their occult/Satanist lyrical themes.  Not to mention their visual appearance has become a staple of cosplayers during this time of year.

If you see someone walking around as a pope with skull face paint, this is the band they are portraying with their costume.

Early Slipknot embodies that strange late-90s vibe that ended up being mainstream but still had a really eerie quality to it.  This song is one of the best representations of that for me.  I remember falling asleep listening to this album as a teenager and waking up when the haunting screech of this song kicked in.

It was absolutely terrifying and I’ve loved it ever since.

The only instrumental song on this list, this tune always reminds me of my personal practice since I tend to lean more towards folk magick.

I always visualize myself walking through the woods during fall, so probably somewhere in Appalachia or the northeastern United States, absorbing nature and collecting ingredients while listening to this song.

This song is one of the newest entries to this list and a bit outside of the norm sonically.  Thematically, it’s absolutely perfect for this time of year.

The Bridge City Sinners take a little bit of what makes Ghost so fun and puts a bluegrass spin on it.

If you are a fan of the Nightmare on Elm Street movies then you are very well aware of this song.  Working as the theme for the third installment of the franchise, Dream Warriors mixes 80s hair metal goodness with the themes of one of the creepiest slasher film series in existence.

While most Halloween/Samhain playlists will include The Time Warp, I personally think the opening song for The Rocky Horror Picture Show truly captures the spirit of the film and why it is a must-watch every Samhain/Halloween.

If you are a Spotify user and want even more songs for your Halloween/Samhain celebration, feel free to follow my Spooky Tunes Spotify playlist.  I’ve been curating it for several years and am always looking for recommendations.
Let me know on Twitter what your favorite songs on this list are or what I should add to my playlist by tagging @plentiful_earth with the hashtag #peSpookyTunes 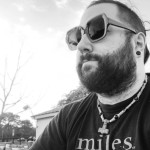