Home » Blog » Community » The Lost Witch: How I lost my spark and re-discovered it

What do you do when you’ve been practicing magick for almost your entire life and suddenly you’re not feeling that connection anymore? Do you abandon your religious practice and find a new one? Do you keep going through the motions even though you don’t feel them in your heart? Do you take a break and come back to it a few years later? What is a witch to do when they are in a crisis of faith?

If you are like this witch, you go on a journey of exploration, self-doubt, and letting go of what you once knew.

The Spark of a New Witch

I first began to practice magick at the age of nine. I don’t recall how I found myself on a website about witchcraft and spells but the glittery pentacles on the background intrigued my young mind. I so badly wanted to try some of the spells I was seeing, but I had none of the supplies that the majority of these recipes called for. So, when I found a healing spell that simply called for a rock and someone with a headache I knew I could do this! I found a semi-large rock outside and taking my little brother down into the yard below, surrounded by trees where our grandparents could not see what we were up to, I began to recite the spell.

Did he have a headache that needed curing? No – but don’t think I would let that stop me. I recall the words of the spell like it was yesterday and not 22 years ago.

You hold the rock in your non-dominant hand while placing your dominant hand upon the person’s head and begin to say: “From your head to my hand to God’s hand.” You recite this until the headache is gone.

Looking back I’m not exactly certain as to the point of the rock, but I followed each instruction explicitly. In the end, we were certain that the non-existent headache had been cured;

at that moment I decided that I would become a witch.

Some kids dreamed about growing up to be schoolteachers or firefighters, while others just wanted to travel the world. I was going to be a witch. From the time I was a kid playing at healing until my mid-twenties, I thought that I had it all figured out. I had led groups of semi-New Age followers in monthly spiritual meetings that met at the local library, had been part of an amazing Pagan meetup group that I actually met my husband through, and had been part of a few private covens as well.

Everything was going great and I knew exactly where my life was headed…until I didn’t.

When the spark of Witchcraft Fades

Gradually rituals did not spark that feeling inside my chest that they used to. Calling on the four elements was a dreaded chore instead of a welcome ritual. And casting a circle? Forget about it.

I had lost my inner witch and I had no idea how to get her back.

For someone whose identity was completely wrapped up in their religion, this was a serious blow to my entire sense of who I was. I felt lost, trapped, and completely alone in the world.

These feelings grew inside of me for years, and I continued to go through the motions because I couldn’t imagine not living the life of a witch. Magick had been my joy and directed where I went in life; to suddenly doubt everything was one of the hardest experiences I’ve ever gone through.

I questioned much of my practice as I began to educate myself more on issues of systemic racism, cultural appropriation, and the LGBTQ community. Was my practice welcoming to transgender folks? Was the language I was using inherently racist even if that was not my intention? What right did I have to hang a dream catcher above my bed as though I could understand the sacredness it held in indigenous American cultures? I didn’t know the songs and the ceremonies, but I felt it was my right to use their sacred symbols and tools because I thought they were pretty?

When I began to question aloud these things I met some resistance from many friends and locals that I knew. Maybe I was wrong to be worried so much about all of this then. I mean, it’s all about your intent right? As long as I didn’t intend to be harmful that’s what counted. Wrong!

As I have navigated through these issues and continue to learn and educate myself I can see that I can do better. I can be better, and I do not have to continue to insult other people, cultures, and spiritual practices because of my ignorance.

For over a year I didn’t practice my craft.

How I Reclaimed My Witchdom

I didn’t light candles or incense or call upon my deities. I felt lost and alone, and I wondered if I could ever come back from it. I began to read articles by other witches, Pagans, polytheists and magickal practitioners and saw that many of them were having the same issues. I was not the only one questioning my practice and my beliefs. I began to see the light at the end of the tunnel. I started to go back to the basics of what I had once learned and began to tweak things. I do not work with a male and female deity because I need not need the gender balance. I do not use tools that have no meaning for me. I cast a circle when I want to. If I feel I need to work a hex or binding, I do it. I am no longer allowing myself to be held back by religious dogma and instead let my intuition guide me. If I come across a practice that I believe is culturally appropriative, I do not engage in it. I have changed the words I use that may be considered racist by people of color. I want to be the best witch that I can, but I want to be respectful and walk with integrity.

If I make a mistake and get called out, I hope that I can accept the constructive criticism with grace and educate myself on problematic behaviors. I am far from perfect and I continue to blunder and make mistakes that make me cringe, but I have begun to walk a path that I believe is more honest, compassionate and truthful than what I previously did.

Me, a Witch of Today

I have been lighting candles and incense on my altars and giving offerings to the Gods I work with. I have started growing herbs and making tinctures again. Cleansing my altar has once again begun to have meaning for me, and it now gives me that sense of joy and connection that I was missing for so long.

My Dream for You, Witch

For those that may be experiencing this loss of connection and faith, I hope that my story can help you see that it doesn’t have to be the end. You can get your witch back, but it does take work. It’s not easy and it’s not pretty, but if you’re dedicated you can get through it and once again feel part of that divine network of energy that makes witchcraft so diverse and beautiful. 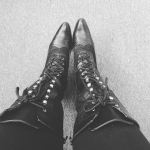 More Articles By This Author

This author does not have any more posts.